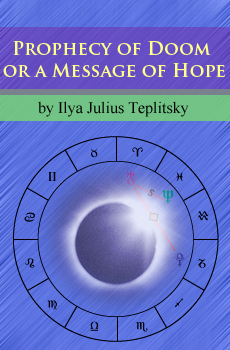 The economic challenges in 2014-21 will indeed impose hardships upon a great many here and around the globe. This 7-year period will also be a time of political instability and a dramatic rise in violence. However, crisis is an opportunity. Instead of simply coping, you may even prosper in 2014-21.

And here are the opportunities that this challenging period may present to you.

Innovations in Technology and Arts

Each stressful aspect between Uranus, Neptune and Pluto in the past coincided with a dramatic burst of creativity leading to innovations, sometimes even revolutions, in technology and the arts. Thus, Uranus/Pluto conjunction in the 1960s and Uranus/Neptune semi-square in the early 1970s coincided with a space exploration and astounding improvements in passenger air travel, while the Beatles and the Rolling Stones led the revolution in the performing arts. At the same time, color TVs replaced their black and white predecessors, thus revolutionizing the home entertainment industry.

Besides the fall of the Berlin Wall and the collapse of apartheid in South Africa, Uranus/Pluto semi-square in the late 1980s and Uranus/Neptune conjunction in the mid 1990s welcomed the triumphant entrance of personal computers into our home and workplace, while the introduction of the Internet to the masses forever changed not only the way we conduct business, but our very lifestyle.

Since Uranus and Pluto began to form their square aspect in 2011, smart phones and tablets have become an integral part of our everyday life, and so did flat screen TVs and 3-D movies. More of such technical and artistic innovations will come into being in 2014-21.

As happened during all economic calamities in the past under stressful aspects between Uranus, Neptune and Pluto, the economic hardships in 2014-21 will force openness to innovations, and those with a spark of creative genius will have a fighting chance to implement their new revolutionary ideas into reality.

Even though, you will be greatly influenced by the economic and political events in the world around you, the success or failure of your enterprise depends mostly on your own astrological chart and how this chart interacts with the stressful planetary aspects in 2014-21. Read more about astrological consulting.

Each stressful aspect between Uranus, Neptune and Pluto in the past witnessed dramatic social innovations that forever changed the very fabric of our society. Thus, Uranus/Pluto conjunction in the mid 1960s and Uranus/Neptune semi-square in the early 1970s coincided with a revolution in sexual mores and the triumph of the Civil Rights and anti-war movements.

Uranus/Pluto semi-square in the late 1980s and Uranus/Neptune conjunction in the mid 1990s coincided with the great social upheaval in Europe due to the collapse of the Soviet Union. Meanwhile, China emerged as a world economic superpower. It is likely to replace the U.S. as the most powerful nation on the planet in a couple of decades. The true significance of this change was already apparent in the late 1980s and mid 1990s. Our economy flooded with cheap Chinese goods was transformed from manufacturing to service economy, and some of our industries disappeared as a result. In this period, the outsourcing began en mass, and many of our well-paid manufacturing jobs were lost to East Asia, thus making the gap between rich and poor in the U.S. even wider.

Since Uranus and Pluto formed their square in 2011, significant social transformations have already occurred. They included Obamacare, and legalization of gay marriages and marihuana use in some States. Even more dramatic social transformation will occur in 2014-21 presenting unique opportunities for those fighting social and economic injustices in our country and around the globe. However, no grass roots leader equal to Martin Luther King will arise to “have a dream” powerful enough to inspire the nation. Instead, social transformations in 2014-21 will be implemented by the progressive forces of the establishment, as has occurred in 2011-13. Therefore, those who champion various social causes will accomplish more by aligning themselves with already established political parties. Working with already established organizations, such as MoveOn, Tea Party, UN, Greenpeace, Doctors without Borders or Sierra Club may also be a good choice.

Analyzing your astrological chart and how it interacts with the planetary configuration in 2014-21 may help you to make informed decisions. Read more about astrological consulting.

All recessions provide rare investment opportunities, and such opportunities will be found not only in stocks and real estate, but also in works of art and collectibles. However, investing during 2014-17 will not be for faint-hearted due to high price volatility, and only those with proven innate skills for such investments should attempt it during this period. Investing in rental properties in desirable neighborhoods may prove the best choice for many of us, but alas—not for all. To read more, check my article here, Stock Market, Precious Metals and Real Estate. Also, consider reading my ebook, Psychology of Investing. Analyzing your astrological chart to assess your investment opportunities in 2014-21 may also prove invaluable. Read more about astrological consulting.

Under stressful aspects between Uranus, Neptune and Pluto in 1963-74 similar to those taking place in 2011-21, a small but sizable minority of Americans and Western Europeans attempted to escape the restrictions of conventional society into hippie communes, LSD, Eastern religions, mediation and Yoga. Similar phenomenon also occurred under similar aspects between Uranus, Neptune and Pluto in 1985-95. Mind-altering drugs, Eastern religions and various forms of self-improvement became very popular in the nations of the former Soviet Block, while Islam gained new strength in the Middle East, Central Asia, China and Russia.

We may expect another “great escape” to take place in 2014-21. Many, especially seniors and early retirees, will escape the economic downturn by selling or renting their homes and moving to more affordable areas in the U.S. and abroad. More adventurous will move into their RVs and cruise around the country as a lifestyle for a year or two. Younger folks may prefer the forms of refuge already established in 1960s and 1990s, such as intentional communes. Tent towns populated by families of the unemployed may spring to life again in the vicinity of major metropolitan areas as occurred at the height of the Great Recession in 2009. There will be a dramatic increase in the number of people seeking solace in meditation and religion. Besides a relief from life pressures, many of these seekers of transcendental experiences will indeed find them. Under the influence Neptune/Pluto septile and Uranus/Neptune semi-square, they will also discover the true meaning and purpose of their lives.

Besides symbolizing inner search for the divine, Neptune also stands for confusion, deception and self-deception. As a result, we may also observe the rise of exploitive cults, similar to those led by Jim Jones in the 1970s or by David Koresh in the 1990s. We may also expect a rise in drug, alcohol, sex and food addictions.

Should you end or at least limit your participation in the “Rat Race?” Is it the right time to do it in 2014-21? Your astrological chart may provide you with the answers. Read more about astrological consulting.

The influence of the stressful aspects of Neptune will not be limited to the rise of popularity of nontraditional spiritual practices in the West. It will also result in the rise of Islam. It will play even a greater role in the presently secular Muslim countries, such as Turkey and the nations of North Africa and Central Asia. Besides, millions of secular Muslims in Russia, China and India will become more observant.

For most Muslims, Islam will be a solace during the hard and confusing times in 2014-21. Unfortunately, we will also observe further fragmentation of Islam onto various sects, some of which will be very militant.

Decline of the America’s Empire

So far, the U.S. has been evolving according to the 248-year Pluto rotation cycle. Our country emerged as a world superpower in the 1870s, close to Pluto aphelion in 1865, the beginning of Pluto rotation cycle. It reached the peak of its economic, military and political power in the 1990s, close to Pluto perihelion in 1989, the middle of this cycle. From this point on, the U.S. has been on a decline. This 7-year period in 2014-21 will determine whether or not the U.S. will continue losing its economic, political and military superiority. In the worst-case scenario, by the end of the Pluto rotation cycle in 2113 the U.S. will be no longer a world superpower. A shadow of its former glory, it will join the club of other former superpower, such as Britain, France, Spain, Poland, Austria, Italy, Egypt, Mongolia, and Turkey. In the best-case scenario, the famous American creativity will be fueled by the challenges of hard economic times in 2014-21. Rising to these challenges, our country will reverse its decline and remain a world superpower (and a great place to live as well) for a few centuries to come, as was the case with the Roman Empire. This 7-year period from 2014 through 2021 may be the last window of opportunity for such a reversal. The outcome depends not only on the stars, but also on those taking an active part in the dramatic events. It depends on us!

Even though, you will be greatly influenced by the economic and political events in the world around you, your successes or failures in 2014-21 will depend mostly on your own astrological chart, and how this chart interacts with the stressful planetary aspects during this period. Read more about astrological consulting.

Meanwhile, I am also available for lectures, classes and workshops at your place of work, your church or your professional association.