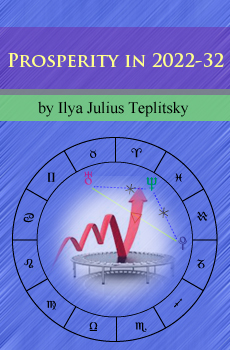 The U.S. and most of the rest of the world will enter a 10-year period of relative peace and prosperity in 2022, when Neptune and Pluto begin forming their sextile aspect (60°). Historically, these sextiles coincide with periods of economic growth, low unemployment and political stability. Recessions do occur under such sextiles, but they are never severe. This politically and economically benign period will last until Uranus and Pluto enter their semi-square in 2032.

The years of 2024-29 will be remembered as one of the most peaceful and prosperous 6-year periods in the 21st century with Uranus forming harmonious aspects to Neptune/Pluto sextile. The planetary positions will be similar to those that took place in the 1990s. So, we may expect stable economic growth, a significant reduction in violence, economic and political cooperation between world superpowers, a dramatic rise in the stock market and rising living standards worldwide. Once again, future economists will pronounce, “This time is different.” Unfortunately, “this time” will not be different, and the economic boom in 2022-32 will be replaced by a 3-year period of political and economic instability marked by Uranus/Pluto semi-square in 2032-35.

Even though the period of 2022-32 will be generally peaceful, there still will be considerable chances that the U.S. will be involved in military actions. In 2029-30, Uranus and Saturn will transit together through the sigh of Gemini. Such transits have frequently coincided with the U.S. wars. The last time, this simultaneous transit occurred in 1943-45 during the conclusion of WWII. Therefore, the likelihood of another U.S. war starting in 2029-30 is very high.

This war, if it occurs, will take place overseas and will not seriously disrupt life inside the U.S. Unlike WWII, this war will not be severe, and American casualties in this new war will be relatively small. You will be able to read more about it in my forthcoming book, America’s Future Wars, to be published in 2016.